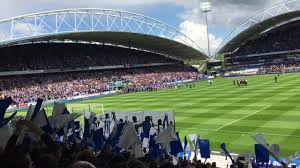 EPL new boys Huddersfield Town announced the restructuring of their Academy this weekend – a move which has been met with a mixed response.

Had an article in the Daily Mail not emerged earlier this month the decision would have come as huge shock, especially when you factor in Huddersfield’s promotion to the top table and the riches that come with it.

Last season Chelsea banked in excess of £150m from their share of TV broadcast money, while rock-bottom Sunderland claimed almost £100m. With that in mind you can assume Huddersfield will claim in excess of £100m this time around just for being in the top flight and so on the face of it scaling back their Academy seems bonkers and short-sighted.

The Terriers claim their Academy, that runs from Under-8s right the way through to the Under-23s, costs £20,000 a week or £1million a year to maintain – a drop in the ocean when you factor in their income. But GoPlay Sports understands their decision is not a financial one and nothing to do with cost-cutting and more about being able to develop players into their first team. Fans, parents and local businesses have accused them of putting finances before youth development, but when the facts are laid down on the table, it seems a move that makes sense.

Only one player since the HTAFC Academy opened 18 years ago developed into a Premier League player – Jon Stead, who played for Sunderland, Blackburn and Sheffield United.

The likes of Jack Hunt and Alex Smithies have forged decent careers at Championship level, while current players Philip Billing and Tommy Smith were brought into the Academy at 17 and 20 respectively. They weren’t nurtured by the Terriers from age 8, but picked up from Denmark and Manchester City and then brought through into the first team and that indeed will be the aim of the new set-up.

Huddersfield plan to axe every team from under-8s to Under-16s and will keep only their Under-18s and Under-23s as they move from a category 2 to a category 4 Academy. That means they will now only be allowed to recruit and develop talent from the age of 16 and over with the current youth sides being phased out within the next month.

If any criticism is to be lodged at Huddersfield and Hoyle it is the timing of the decision – just over a month into the new season. And after the euphoria of promotion to the Premier League, the club’s Academy coaches and young players will be packing their bags with just a month consultancy period offered to them.

Huddersfield though are now “focusing on creating a clear pathway to the first team for players with the ability to thrive” with chairman Dean Hoyle happy to implement the change, which he has described as “the hardest” he has had to make while at the helm.

Hoyle, who made his fortune from greeting cards, pointed out that the ethos of the Academy was failing.

“Our Academy system must provide a strong and obvious pathway to the First Team for players who are good enough, whilst also representing value for the Club. Upon review, this is not something that we could claim,” he told the club’s website.

It’s a move which Championship side Brentford made in early 2016 and one which they were criticized for for being “short-sighted”. The Bees have scrapped all but their Under-23 side or B team and are now solely focused on developing players aged 17 or above.

They aim to pick up released players from Premier League Academies, while also picking up players from “undervalued markets” overseas. Their Academy was running at a cost of £2m a year and owner Matthew Benham decided it was not worth the while.

And one of the major reasons why these Academies are failing is that Premier League clubs, with category 1 status, can simply cherry-pick the best youngsters and pay a nominal compensation fee.  Under the Elite Player Performance Plan (EPPP) the biggest clubs get to swallow up the best talent, while other rules under the plan are restrictive.

READ: #htafc has confirmed plans to reorganise the @htafcacademy after a lengthy review process at Board level https://t.co/zfalwdAfbU (DTS) pic.twitter.com/8pKo1YFUaG

Brentford’s head of football operations Robert Rowan told The Guardian last year:  “It allowed us far more flexibility on how we do that because we are not as restricted by regulation or rules. It was the most sustainable and effective option. It’s a lot easier to assess something that has got a turnaround of three years than over 10 years. ”

It’s widely understood that elite youth talent in England is actively encouraged to attend the category 1 academies and so a team like Huddersfield with Manchester United and Manchester City almost on their door step are always vulnerable to their best youngsters being recruited.

The best youngsters who have been scouted by the FA and already recruited by England will be actively encouraged, if not told, to join the elite Academies – leaving the likes of Brentford and Huddersfield kicking their heels.

It’s a failing model for non-elite clubs and we will likely see more English clubs follow in the footsteps of Brentford and Huddersfield as they look to develop talent that can make an impact in the first team, rather than trying to nurture an 8-year-old that will get picked off by the big guns if he shows anywhere near the talent that’s required.